A Recession is Coming!

Let's just clear the air right now - a recession is coming.  There I said it, it's out in the open now.  The only problem is that I don’t know (nor does anyone else) what will cause it, when it will start, how bad it will get, or when it will end.  Those are unknowns, for which even the smartest economist can’t possibly predict.  Oh, they’ll try and just because they try, doesn’t necessarily mean they’ll be correct with their predictions.  Prognostication is a fool’s game.

I just want you to get comfortable with the fact that a recession is coming . . .

Not shocking about that statement is that recessions have ALWAYS been (and will always be) a part of our economy.  Like them, Love them, Hate them or if you’re simply indifferent to them, you can’t stop them from coming.   No one can.

There are essentially two types of people when it comes to recessions:  Those that hate them, and those that thrive in them. What’s the difference between hating them, and thriving in them?  Perspective.  Speculators HATE recessions – because they see their day trading accounts get decimated in a rather short order, which lends itself to being fearful of further carnage.   The second type of person is one that takes the long-term view, who displays the necessary patience, and understands that recessions are necessary to correct the imbalances which ultimately make better entry points into the equity markets.

What do I mean by imbalances?

Well, when you have the trading of digital jpegs using NFT’s (Non-Fungible Tokens) amongst people who don’t have jobs, in the hopes of striking it rich, well, that type of speculation is not good for the long-term health of an economy. It simply can’t be sustained.  That type of nonsense erodes the true value of American companies that actually produce goods and services.  Sometimes forest fires, as violent as they may be, are necessary to provide nature with a reset button, allowing the forest bed to become more vibrant, which not only ensures its long-term survival, but allows it to thrive.

And what about the prevailing thought of moving into bonds in recessionary times to avoid the inevitable downturn of equities . . . well, historical data says otherwise. 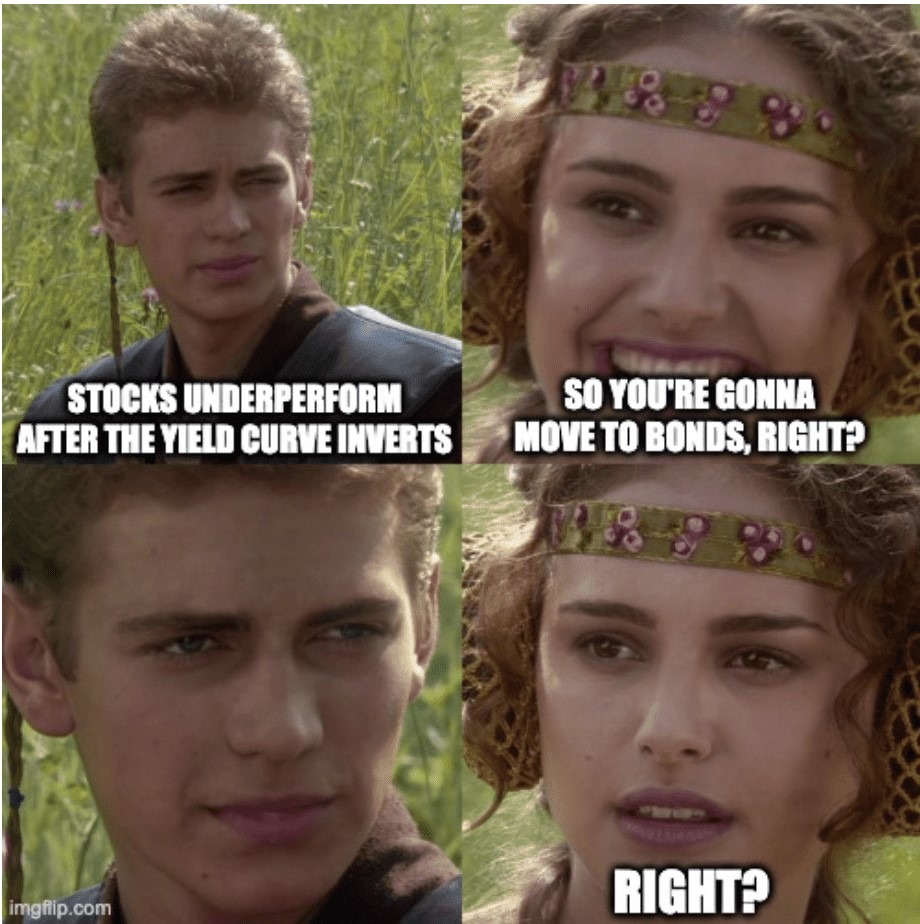 Data suggests that while U.S. equities during a recession will under perform their historical averages, it also suggests that bonds fair no better, actually under performing their equity counterpart.  Especially today, given the Fed’s aggressive stance on inflation, which potentially requires more than just a few interest rate hikes.

So, what’s a frustrated investor to do?

At this point, in most instances a precursor to any recession is either a correction or a bear market.   As you may have noticed with your 1st quarter statements, we are smack-dab in the middle of a market correction, which could very well turn into a bear market.  It’s too late, the carnage has already been done, and we can’t do anything about it.  We can’t move to bonds, because as the above data suggests, bonds are more likely to grow even more slowly than equities in the subsequent period.  Cash is certainly not an option, because it won’t grow at all.

So, the only real action to take is . . . inaction.  Ignore it.  Go on about your life, and let the equity market do equity market things.  Focus on what you can control, not what you can’t.  Focus on family, friends, and what brings you happiness.  A recession is coming, and that means you are out of luck.  We all are.

That’s how the equity markets are supposed to work.  The normal but sometimes scary ups and downs are a part of your financial plan, and thank goodness they are, because when they come, they can present a real opportunity for the patient long-term investor to buy companies, that once were expensive, and are now selling for a discount!

Now if only the weather would cooperate!