It’s all a matter of reference.  This bear market began for different reasons yet has done the same damage to investor psyche and confidence, just as all the past bear markets have done.  The more things change the more they stay the same.

On June 5th, 1970, this gem of a magazine cover was published at the height of panic driven fear that bear markets often create: 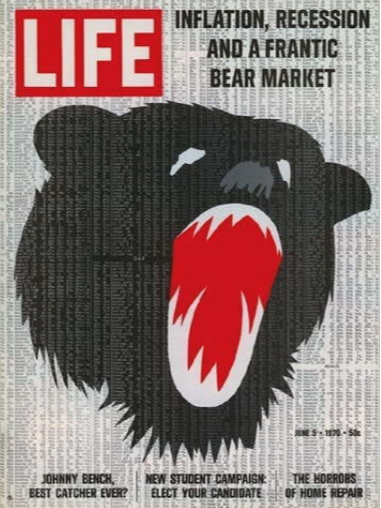 Of course, they won’t take credit, but the financial media has an impressive track record of generating the most amount of fear at the best possible moment.  What do I mean by best possible moment?  Headlines like these are usually generated when the worst is already over and the best time to invest has just began.

The S&P 500 Index level at the time of this cover was published was 76.17 (No, that’s not a misprint) and just experienced an 18-month 36% decline.  Cue the financial media’s catastrophic headline (this is what financial journalism has always done- and continues to do.)  It was at that moment when this magazine cover was published that the media had investors right where they wanted them – trapped in a vortex of fear.

As I write this column the S&P 500 is today at 3,900 nearly 50 times higher (including 2022’s bear market) than at the time this cover was published.  I’m guessing that the retiree whose lived through a multi-decade retirement doesn’t remember this cover.

There has been a great deal of anxiety from investors as to when this current bear market will end (with some investors wondering IF it will ever end), yet maybe we’ve already seen a bear market bottom.  We don’t know and won’t for many months.

What I do know is that this bear market, just like every other historical bear market that has proceeded it, will end.  What I don’t know is when the bear market will end – Nobody does.  When it will end can never be a known.  Did Oct 12th’s spectacular bottom reversal – a gap downward on the opening, a new intraday low, and a close far above the previous days’ mark the end of 2022’s bear market?  Again, a question, that cannot be known.  There are no facts about the future - is the only known for which investors can rely.

Another lesson that gets lost in every bear market is the enduring resilience of the American economy and its capacity to ultimately overcome any existential crises.  An important part of the of the unbreakable American spirit is to adapt and overcome - It’s woven into our economy’s DNA.  Time after time America’s great companies have been kicked to the curb and left for dead, only to reinvent themselves and resume their long-term growth trends, ultimately triumphing over every obstacle placed before them.

Investors sucked into the vortex of fear get lost in the trees and aren’t able to see the forest.  Only the patient long-term investor can see bear markets for what they truly are – Opportunities.  Recessions come and go, bear markets come and go, but great companies endure and prosper.  I can’t help but think – the cheaper the prices of these great companies get, the greater their enduring value.

Stay the course, my friends.