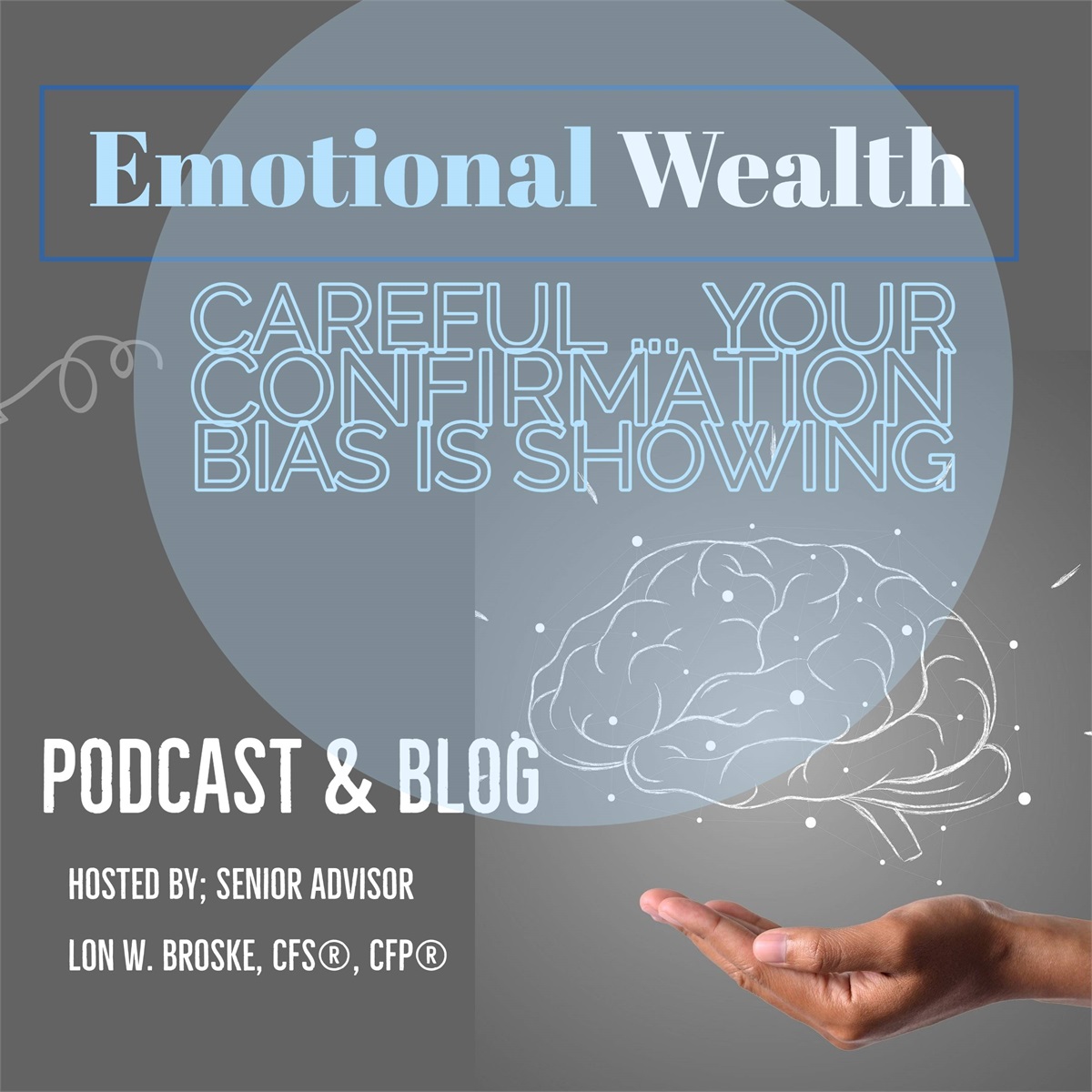 Careful . . . Your Confirmation Bias Is Showing

Careful . . . Your Confirmation Bias Is Showing.

A Lesson in Financial History

I think we can all agree that these are polarizing times.  We can debate ad nauseam about the particulars of why this is so, but that goes beyond the scope of my little diatribe.  I’ve spoken with many clients, friends, and family members over the last few months, and without fail, the subject of politics comes up and invariably a tidal wave of emotions quickly surface.   No matter your leaning of right or left, the minds of those in both camps are made up, and no evidence can be given from the opposing side to change a mind that has already been decided.  It’s nearly impossible to interject a change of one’s political stance at this point in our current election cycle.

What is confirmation bias?  This common term in psychology (https://www.simplypsychology.org/confirmation-bias.html) is defined as the tendency to look for information that supports rather than rejects, one’s preconceptions, typically by interpreting evidence to confirm existing beliefs while rejecting or ignoring conflicting data.  In other words, people will see and believe what they want to, in order to support their existing beliefs or hypotheses.  Confirmation bias is the reason why two people can interpret a single set of data in two entirely different ways, in order to fit their own narrative.

Confirmation bias is exceedingly prevalent in politics, and while it may be viewed as normal and acceptable to those that are applying it (think to yourself: “I’m voting for insert political candidate here no matter what”), and you’re ok with that way of thinking, (that’s political confirmation bias).  The danger in accepting confirmation bias in your politics, is that it could easily creep into your investment decisions.

It was the great Warren Buffett who said it best: “If you mix politics with your investment decisions, you’re making a big mistake.

While confirmation bias is what you may actually be seeking in your politics, it DOES NOT belong in your investments.  Confirmation bias only serves to get you further from your goals rather than closer to them!

I certainly understand that this election seems to be frightened with extraordinary high levels of anxiety about its outcome.  I get that, I really do.  However, I implore you on all levels to take your political convictions completely out of your investment decision-making.

That’s great Lon, but I simply don’t believe you, because this time it really is “the most important election of our lifetime.”  What proof is there that it doesn’t matter as to which candidate wins?  Look no further than the chart below: 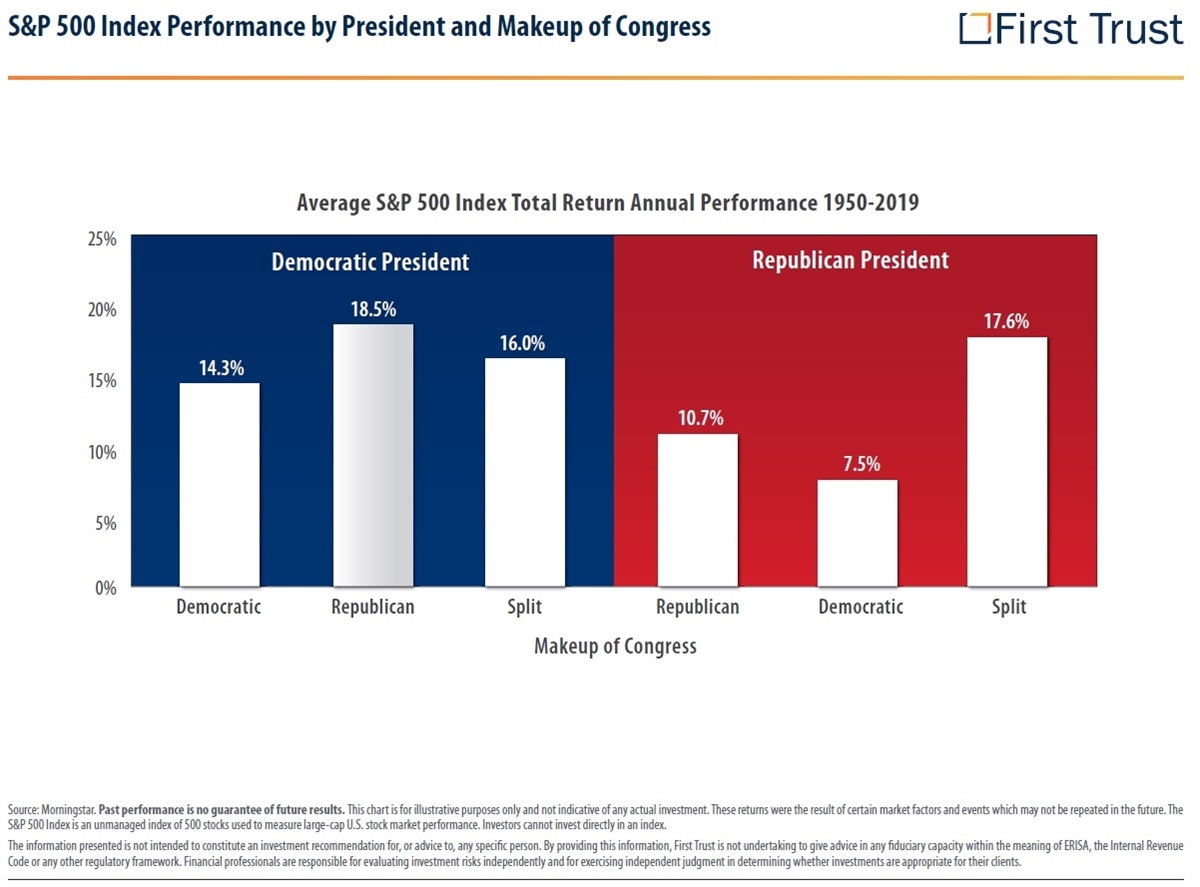 I hate to be the party pooper to your political bias, but as you can see, that regardless of who wins, the chances are that a divided congress will remain in place, which simply hasn’t been a needle mover for your investments, and just to be fair, First Trust went all the way back to 1950!

No matter who gets elected the great companies of America will make the necessary adjustments to ensure their profitability.  It’s in their DNA.  The great companies of America will continue to act in their shareholder’s best interests.  The president, nor the Congress, nor the Supreme Court can force a company to lose money for any length of time.  It hasn’t happened in the history of this great Republic, and no matter the outcome of this election, it will not happen going forward.

No matter who becomes president in January, and no matter what policies he implements, the electorate – you and I – get another go at him in 23 months with the mid-term elections, by voting to change the makeup of Congress as a way to rebuke the results from the previous presidential election.  It’s just that simple.

No matter the election outcome, you still have financial goals.  I remain committed to help and guide you to realize THOSE goals.  Politics are simply another distraction, and I will remain steadfast in my commitment to my clients who have placed their trust in me, and my firm.